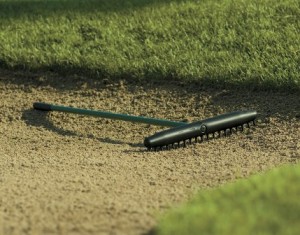 Before leaving a bunker, a player should carefully fill up and smooth over all holes and footprints made, and then leave the rake with the handle pointing toward the tee of the hole being played.

1. Always enter the bunker at the lowest point.
2. Lightly rake diagonally as you exit the bunker.
3. If required rake other affected areas.
4. Do not pile sand at the edge of the bunker. Turn the rake over and push back excess sand.

Always leave rake on the white painted tee marker outside the bunker with the handle parallel to the line of flight of the hole being played and as far from the edge as possible.

1. Remove any loose turf from the affected area.
2. Knock in all sides of the edge of the divot with your club.

3. Fill the divot with sand.

1. Always start at the back of the mark and push forward with the repairer.
2. Use repairer around all sides and slowly ease turf toward the centre of the mark. Do not lift the soil upwards.
3. Lightly tap down with putter.
4. Your completed repair should look like this. 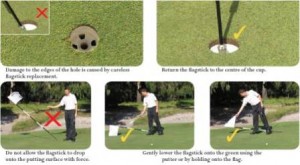 Flagsticks, Bags etc.
Players should ensure that, when putting down bags, or the flagstick, no damage is done to the putting green, and that neither they nor their caddies damage the hole by standing close to it in handling the flagstick or in removing the ball from the hole. The flagstick should be properly replaced in the hole before the players leave the putting green.
Handling the flag
1. Don’t drop the flagstick on the putting surface as it will cause damage.
2. Always lower the flagstick by club
3….or by hand.
4. Avoid damage to surrounds by placing the stick in the centre of the cup.
Removing Ball
Players are requested to NOT to use their putter to remove their golf ball from the hole.