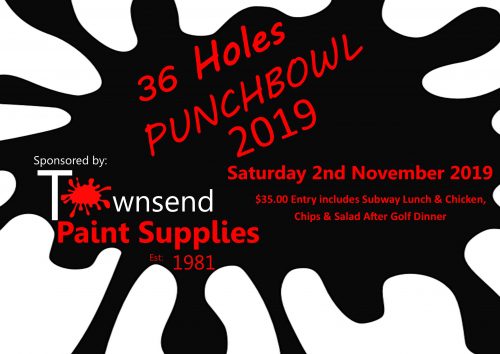 The Punch Bowl annual trophy was named after the locality near the Old Sea Links and was originated by the Bunbury Golf Club in the ‘thirties’ probably in 1934. At first it was a local club fixture and subsequently became an Open event for local players and visitors from any other registered club. Visitors from all over the State had been catered for by the rival Sandridge Park Club for some years with its Visitor’s Day Cup. The Second World War had caused the closure of Sandridge Park Club and very restricted play at Sea Links and the continuation of an Open fixture was considered very desirable. The Punch Bowl had always been played for at Easter time and Mr HAC Eastman was instrumental in persuading the committee of the day to transfer it to an open event later in the year and this has become a much sought after trophy. The Punch Bowl itself was presented by Mr C A Donaldson and of later years the trophy that goes with it has been presented by Mr F J Flanagan, a former Club President. Mr Joe Griffith sponsored the Punch Bowl for many years and member Steve Townsend of Townsend’s Paint Supplies has been the current sponsor for over 15 years

← Back to previous page